My Stories, Reports From The Road, Travel 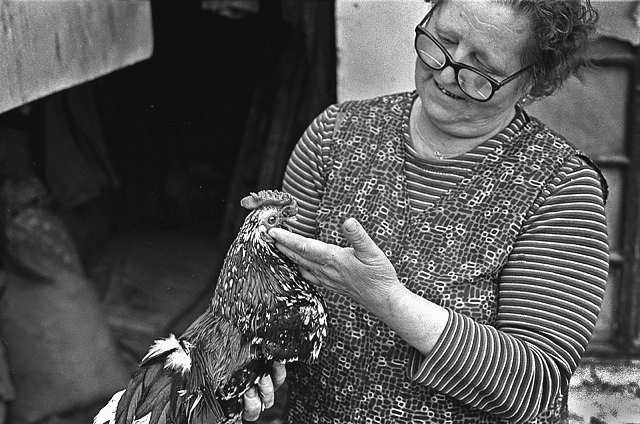 A month ago we returned to Spain to the coldest, wettest spring in Europe in fifty years. Most of the Easter processions were rained out last week. Because of the weather we’ve stayed close to home, happy to stay put in Marbella, where I’ve been editing my book and Cradoc is cataloging a lifetime of photographs.

In the spirit of Easter, I’ve resurrected a story I want to share the story about another unseasonably cold spring in Europe twenty-two years ago.

Momma She Killed a Rooster

“Momma, she killed a rooster for you,” Bela said through the closed door. “Come eat soon.”

I rolled over in bed and stared at my husband. “Did he say a rooster?”

It was April, 1991. We were in Hungary and had been traveling for almost a year – three months in Alaska, seven months in Europe.

At home Cradoc and I ate a healthy diet of salad, soup, fish, fruit, a bit of chicken and a lot of vegetables. The Eastern European diet was made up mostly of meat, cheap and easy to get, with barely a vegetable in sight. For weeks we’d been force fed, like Strasbourg geese; roasted pork, spicy meat stews, casseroles, beef, ham, sausage and salami. Our clothes reeked from the acrid meaty smell of our sweat and just the thought of meat made our gorge rise.

We searched for fruit and vegetables in the markets but after a long, cold winter at the end of a long, cold Soviet occupation the closest thing we found were root vegetables, dried beans and large barrels of sauerkraut.

One day I found bananas at a market in Budapest. I bought a bunch for a few U.S. dollars and gave them to the family we were staying with over Easter. “We haven’t had bananas in years.” The wife chocked up and cradled the bunch like a newborn child.

The peaceful end of a forty-five year Soviet occupation in Hungary meant the last of the troops would be gone in June. Vendors in Budapest sold Soviet military paraphernalia on street corners and Russian street signs with red slashes through them were being replaced with pre-communist street names.

The Hungarian people were scared about entering a free market economy. The Russians were taking their economic structure home with them and the west, claiming victory in the Cold War, hadn’t shown up to fill the vacuum.

“Hungarians want to stay in their cage and be fed,” a man explained to me. “They don’t have any idea what to do next, or how to do it. Once they go out of their cage maybe they’ll understand what this freedom means, but it’s too early to tell yet.”

Before we pushed on to Czechoslovakia, a country that just followed Hungary in lifting the visa requirement for Americans, I needed a break from cities, churches and castles. The plan was to splurge on a nice hotel for an overnight stay in the Hungarian countryside. I found a town in the guidebook that looked promising.

In a few hours I’d be able to hide from the world for a day, take a hot bath, turn up the heat in the room as high as I wanted, eat at a fancy restaurant that served vegetables of some sort, sleep late in a cozy bed snuggled under a down duvet and take another bath before hitting the road the next morning.

We took a two hour train ride from Budapest to Eger, a historical town known for its medieval castle. From there we took a bus along a winding mountainous road. A half hour later the driver pulled the bus over and gestured this was our stop.

“We can’t get off here,” I said to the driver. I pointed again to the photo in the guidebook of the pretty resort town in the Bukk mountains. He shook his head yes, we stepped off and the bus sped away. We stood on the side of the road with our backpacks, surrounded by a forest and nothing else.

“I’ve no idea,” Cradoc said. Middle-aged with sore backs from living in a tent for three months in Alaska, sitting long hours on trains, planes, busses and sleeping on lumpy mattresses in guest rooms and cheap hotels in Europe, our road weary bodies didn’t look forward to a long walk with our heavy packs.

Then, out of nowhere, a wiry man ran down the road, his mop of hair flopped over his unshaven face, his thin arms waved in the air. “I am Bela. I have room to rent. You need place to stay?”

We followed him down a side street towards a row of houses not visible from where the bus dropped us off and we stopped in front of a multi-storied white stucco house. “You stay here, ten dollars a day. With breakfast and dinner.”

“Ten dollars is fine but we don’t need the meals.” I needed more control over my food and figured I had a better chance at a restaurant. “We’ll eat out.”

“Restaurants closed. Off season.” Bela shook his head and led us inside. “This is my Momma. She cook for you. No English though.”

Momma, a rotund, welcoming woman with a Cheshire cat smile, pushed her saucer like glasses up her nose and led us upstairs to our simply furnished room. With no down duvet, no bathtub and no thermostat control to take off the chill it wasn’t the room I’d hoped for but it was comfortable enough.

That night, through a mixture of hand gestures and pointing, we asked Momma to make us pasta, plain pasta with butter. No meat. No sour cream. No spices.

While we ate Bela rushed into the kitchen. “For you.” He held up a plastic liter bottle of Pepsi like it was a bottle of fine wine.

In the morning, at our request, Momma made us pancakes loaded with butter and homemade jam. I praised Momma, rubbed my tummy and moaned, “Yum, yum.”

Bela came in, looked at the pancakes and snapped at Momma. He must’ve told her pancakes weren’t special enough to serve to their guests.

“No, Momma will serve you better food next time.”

There wouldn’t be a next time. We planned to take a bus to the nearest train station and head to Czechoslovakia that day.

“Please, stay longer,” said Bela. It was obvious he needed the money. Cradoc handed him $50 for our one night stay instead of $10.

“No, I take money only if you stay.” Bela stared at us with weary eyes. We wanted to help this man who the night before left for work as a night watchman at a cement factory on his beat-up, sputtering dirt bike, a bike that burned so much fuel Bela carried a pint whiskey bottle filled with gas to get him home again, a man who didn’t sleep after work, “I sleep on cement bags at the factory,” who struggled in the early morning digging up his semi-frozen garden in the unseasonably cold spring.

We stayed with Bela and Momma for seven days.

To pass the time we rode rusty bicycles Bela borrowed for us into Szilvasvarad, the resort town we’d been looking for, where, as Bela said, most of the shops and restaurants were still closed for the season. We rested, read, and on nicer days we hiked in the Bukk National Park.

Szilvasvarad was known for its Lipizzan horses. We went to a stud farm and visited the stables often to learn more about these regal, sturdy horses, one of Europe’s oldest breeds, best known for their dancing dressage movements and their reputation as good work horses.

At each meal Bela offered us what he considered special treats: alcohol, cigarettes, wine, candy bars, coffee, strange sugary sweets and more soda, all of which we turned down. This left him at a loss on how to show his appreciation for our stay.

Then Bela came up with the idea of the rooster.

On our sixth day, the morning Momma killed the rooster, I went into the kitchen and stared at a large pot of boiling water with two scrawny rooster legs sticking straight up.

“Sit, sit.” Bela pointed to the table. I sat and Momma put a plate in front of me filled with something crimson, shiny and congealed.

“What’s this?” I asked with a slight edge of panic in my voice.

“Scrambled blood. From the rooster,” Bela croaked. He sat down and Momma stood with her hands on her hips. Both of them watched us closely.

I kicked Cradoc under the table desperate for help, but his plate was filled with even more of the delicacy. He stared at it with a blank, faraway look on his face.

I moved the glob around my plate with my fork, pushed it apart so it wouldn’t look like so much. I asked Momma for a piece of toast, put a tiny amount of the blood on the corner, bit, chewed, gagged and washed it down with a gulp of tea. It tasted like I was licking a bloody wound.

I went back to pushing the glob around on my plate. Bela shook his head and went outside. Momma turned her back to stir the bloodless rooster in the pot. I didn’t waste a second. I put the bloody mess into my paper napkin. Cradoc did the same.

We nibbled on our toast, sipped our tea and waited for Momma to leave the kitchen so we could throw our napkins in the garbage. I was nervous Momma would think we were still hungry and she’d whip us up more bloody treats. When she finally went out we rushed to the trash bin, buried the napkins deep inside and made our escape.

That night there was no escaping our dinner of boiled rooster with meat as tough and tasteless as rawhide.

Sometimes it’s the big things that push us out of the comfort zone of our home; the need for a bigger life, the desire to see the world, experience new cultures, learn new languages.

And sometimes it’s the small things that pull us back, like the desire to make a big pot of vegetable soup in my stainless steel stock pot, using the recipe from my mother’s long closed vegetarian restaurant, the one where you add star anise to the stock to give it a secret boost of flavor that no one can figure out.

After ten months outside my comfort zone I could no longer deal with the differences that made being on the road an adventure.

I needed to go home.

On the morning of the seventh day of our visit I looked out the bedroom window as a rusty, beat-up car with a home-made chicken wire crate tied to the roof pulled into the driveway. We headed downstairs to take a look.

In the yard Bela stood by the car, his weather-beaten face beamed. “Because you stay with me, I have enough food to get through spring. And to buy these.” He pointed to the crate and he and his friend lifted it down from the car roof.

The old rooster had been reborn into forty chirping, yellow chicks.

Revitalized from my stay with Bela and Momma I was ready to find my way home, wherever that was. But Prague and Poland were so close and I wanted to see Paris one more time before I left Europe and…

Momma stood at the back door and waved us into the kitchen for our last breakfast. She knew Bela was busy with the chicks and wouldn’t come inside. She pushed her glasses up her nose, graced us with her beautiful smile and set down a large platter of steaming pancakes. 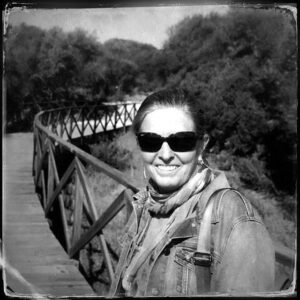 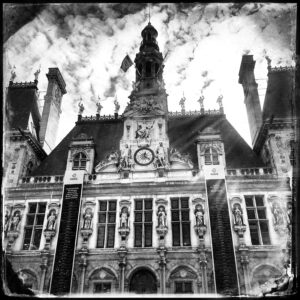 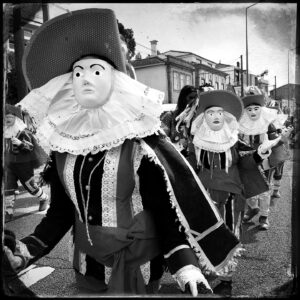