Cradoc and I have been back in Marbella, Spain since the end of March. The cool, windy weather kept us in more than we would have liked, and many of the Easter Week processions were rained out again this year.

With the arrival of the month of May the warmer weather is finally here. Everyone is happy to be outside again. When I first arrived back in Marbella I decided I wanted to see more of Spain; I planned to go to Cordoba, Granada and Sevilla. But after a few days in the apartment, with the sound of lapping waves lulling me to sleep, I decided I was happy to live my day to day life in Marbella on this trip.

We live here with our feet in two different cultures. The American foot has Cradoc working on a software update, his photography and learning to play more Pink Floyd lead parts on his guitar. I have just finished writing the second draft of my memoir. What’s nice is when the work is done we switch to the other foot, the Spanish one, and that slows us down enough to enjoy the more relaxed pace here.

The gift of being here lies in the simple daily events, where going to the supermarket can take all morning, because nothing in Spain is a direct route. First we walk along the promenade, then stop in the hospice thrift store, next is the real estate office where we spend thirty minutes trying to have Teresa, our agent, explain the electric bill (or something else) to us, then onto the phone/internet shop, owned by Teresa’s husband, who multitasks and helps five people at the same time, and one simple task, like renewing our internet for another month, can take us another thirty minutes to complete. And finally when we arrive at the supermarket Cradoc waits for up to twenty-five minutes on the long line at the butcher counter while I do the rest of the shopping. The women in front of him order their week’s worth of meat, meat that is always cut to order, weighed, ground or filleted and wrapped. Then comes the question from the butcher, “Algo mas?” (anything else?), and there always is something else. This process repeats itself several times per shopper until finally Cradoc can order a few chicken cutlets and we can start our journey back home, but not before we walk through Old Town and stop at the fruit and veggie store…

Many of the English speaking expats here live in large developments outside of town called urbanizations. A woman I met from South Africa said she often doesn’t feel like she’s living in Spain. “It must be different for you living in the town center though,” she said. It is different. Cradoc and I try to speak only Spanish (try is the important word), and shop and eat where the locals do.

I meet with a British friend of mine, Katy, for lunch on Thursdays to talk about our writing. She has lived here for several years and has introduced me to several small, family run restaurants.

Last week, as a spring rain poured down outside, we sat at a plain wooden table in a dark room at the Dentro Bar. A golden lab sat on the floor next to me drooling as he watched everyone eat, a small boy ate a large sandwich at a table by himself, four young workers at the next table were eating the daily special, a huge mound of chicken couscous, while a group of older men sat at the bar drinking beers. Every table was filled with people talking loudly trying to be heard over the music.

As I ate my perfectly grilled rosada fish filet, I realized my love of the food in Spain started with my discovery of the Menú del Día.

In 1965 Franco passed a law that all restaurants had to offer a nutritious and affordable meal for the workers on their lunch break (now around 8 to 10 euros) and the Menú del Día was born (The menu of the day is the equivalent of prix fixe menus in French bistros). The law that obliged restaurants to offer the Menú del Día disappeared with Franco in 1975, but thankfully the tradition still continues.

The Menú del Día is available throughout Spain at lunch time, Monday through Friday. There are usually a few dishes to choose from written on a black board, or written on a piece of paper you need to ask for. The meal consists of a starter, a second course, a drink, bread and dessert (usually rice pudding, flan, or yogurt with fresh fruit) or coffee.

Paella is traditionally offered on the Menú del Día only on Thursdays. One theory why this day is the official day for paella is Franco used to go hunting on Thursdays, and he liked to eat paella afterwards. Since no one knew where he would be hunting every restaurant in the country had to be prepared in case he showed up wanting his favorite food. Another theory is Thursday was the day rice was distributed back when food was rationed.

Spain has been in the news lately because of its economic crisis. The 25 % unemployment rate (50% for people under 25 years old) is now equal to the unemployment rate in the U.S. during the Great Depression. In the first three months of this year two hundred and fifty people a day lost their jobs in Malaga Province alone.

The newly elected Prime Minister, Mariano Rajoy, has announced more spending cuts. “There will be reforms announced this Friday, and every Friday after that,” he said, “and they will be major reforms.” His drastic actions, including tax hikes, cutting back on severance pay, and restricting inflation linked salary increases, are not popular and many believe his austerity policies will push Spain into a depression.

The Royal Family has also been in the news. King Juan Carlos’ son-in-law, Inaki Urdangarin, is on trial for allegedly embezzling 5.8 million euro from charities he ran, including one for disabled children. Money was supposedly funneled from public contracts to private companies and offshore bank accounts owned by Inaki.

Recently the King’s thirteen year old grandson shot himself in the foot with a shotgun while hunting in Spain. The incident is being investigated because under Spanish regulations it’s illegal for children under fourteen to use firearms. This event happened a few days before the the King fell and broke his hip while on holiday in Africa. It turns out the seventy-four year old King was on a secret trip to Botswana with his forty-seven year old mistress. The only reason this event made the news was because he had to be rushed back to Madrid for medical treatment, but his wife didn’t visit him in hospital for three days. The new of the mistress did not upset the Spanish people, but the fact the King was in Botswana elephant hunting did.

These are not the first incidents around guns that have caused controversy for the Royal Family. When Juan Carlos was sixteen, in 1956, he accidentally killed his younger brother, Prince Alfonso, when he shot him in the forehead with a revolver. There are different versions of how this accident happened. In October 2004, he killed nine bears in central Romania and in August 2006, it is alleged that King Juan Carlos shot a drunken tame bear (filled with honey and vodka) during a private hunting trip to Russia, although this is denied by the Office of the Spanish Monarchy.

Franco had chosen Prince Juan Carlos, the grandson of King Alfonso XIII who abdicated in 1931, as the successor to his fascist regime, expecting him to continue the military dictatorship. Two days after Franco’s death in 1975 Juan Carlos was reinstated to the throne as King Juan Carlos I. Within two years Spain held its first democratic elections since the Civil War and a year later a new parliament passed a democratic constitution.

Since then the King has held a revered place with the Spanish people. But while the people in Spain cope with severe austerity, a recession and record high unemployment, the fact that the King spent 44,000 euros on his adventure (twice the average annual salary in Spain) has some people suggesting the King should abdicate.

Photos taken in 2006 posted on the Rann Safaris website showed the King standing proudly next to a dead African elephant (see photo below) and in another he was squatted near two dead African buffalo. These photos were widely circulated in the press and has only made things worse for the King. The fact that the he is also the honorary president of the Spanish branch of the World Wildlife Fund, an international environmental organization dedicated to the protection of animals, didn’t help matters either. One of the WWF’s goals for 2012 as stated on their website is “to protect and restore species and their habitats.” 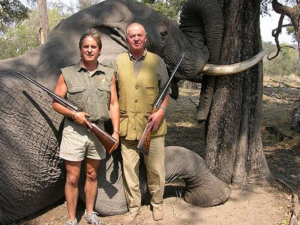